You are here: Home / Meeting Report: Conservation of the Swallowtail in Britain 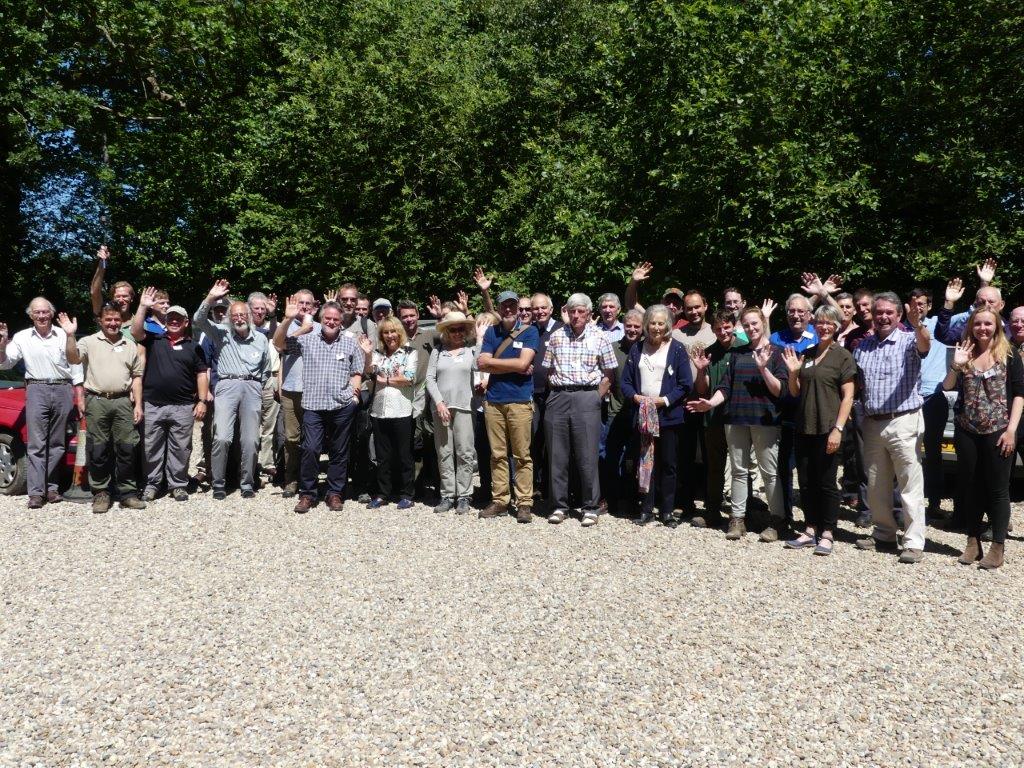 Joint meeting between the Swallowtail and Birdwing Butterfly Trust and the Royal Entomological Society, hosted by the Ted Ellis Trust

For a detailed agenda and pictures of speakers click here.

Worldwide there are around 560 Swallowtail and Birdwing species (Papilionidae). We have just one in the UK and it must surely be our most iconic butterfly. I thought I knew a fair amount about it. I do now. On a magnificent late June day, fifty enthusiasts gathered at the Ted Ellis Trust’s Wheatfen Reserve to hear excellent, informative talks and then go hunting.

To watch a short 8-minute video by Darren Howat summarising the event, see below.

Well-known natural history writer Patrick Barkham spoke eloquently about his love of butterflies, the vulnerability of the British subspecies of Swallowtail, Papilio machaon ssp. britannicus, and its importance in encouraging conservation. A few days later he published an excellent piece in The Guardian about the event. Andy Brazil, County Butterfly Recorder for Norfolk, charted the history of the British Swallowtail, beginning in 1717 when it was named the “Royal William” in James Petiver’s work Papilionum Brittaniae Icones (Images of British Butterflies). There is some confusion about its host plants and distribution in earlier years, but it undoubtedly occurred widely across Britain. The Swallowtail’s demise was brought about by the draining of fens for agriculture. It died out at Wicken Fen in Cambridgeshire in the 1950s but is doing well in Norfolk, which showed a 66% increase in numbers between 1976 and 2015 and a 23% increase between 2005 and 2015. From the outliers on distribution maps, Andy concludes that males have a flight range of around 30km, more distant outliers, some quite extreme, probably being the result of pupae being exported with Norfolk thatch.

The importance of both the quality and quantity of water to fenland ecology was highlighted by Tim Strudwick and Matt Wilkinson from the RSPB’s Strumpshaw Reserve.  The fens, of course, are not just managed for Swallowtails. The default management method is mowing, but Milk Parsley doesn’t respond well to this. Swallowtail larvae feed on the small number of very tall Milk Parsley plants and learning how to create the conditions that allow the plants to grow to their full height is key to the butterfly’s fortunes. It seems as though Swallowtails fare best in unmanaged fen, but there is very little science underlying management methods, evidence being mainly anecdotal. Sea level is rising by more than 3mm a year and, together with tidal surges and storm events, this poses a threat to the fen habitat within decades. Andrea Kelly, Senior Ecologist with The Broads Authority said that there are virtually no data relating biodiversity hotspots to risks of saline incursion. We must be prepared for environmental changes, species translocation being well worth considering. The fens support 1500 species of conservation concern, 66 of them relying entirely on the Broads. Only 20% of fen habitat has the reed and Milk Parsley combination required by the Swallowtail.

Sara Oldfield of the IUCN Species Survival Commission outlined the government’s 25-year environment plan and ecological restoration projects such as the “Fens for the Future” partnership which will restore and reconnect the fens. Since 1995, the RSPB has recreated 400 hectares of wet reedbed, ungrazed fen and wet grassland at Lakenheath. Well established reedbeds are maintained by cutting to achieve a mosaic of old and new reeds. Lakenheath forms part of a network of other fenland nature reserves, some of which are undergoing similar restoration and extension. The Great Fen project is a 50-year plan to create a 3700-hectare wetland centred on Woodwalton and Holme Fens. A show of hands suggested that most at the meeting would welcome scientifically assessed species translocations. Michael Blencowe, Sussex Wildlife Trust, hates cats. Poppy the puss killed one of Sussex’s first overwintered European Swallowtails (P. machaon ssp. gorganus). Following a massive invasion in 1945 only a few were seen each year until 2013 when there was another large invasion resulting in the first confirmed overwintering. Much interest from the public was generated through Michael’s efforts and this helped to track larvae and pupae and follow them through to emergence. As an aside, Michael is co-author of Butterflies of Sussex and was happy to show-off the book’s five-star reviews. He also berated a poor soul who gave it only four stars and there was much mirth when it transpired that the reviewer was in the room. He took it in good humour! As to whether the European subspecies is welcome or a threat, there were mixed views. In the general discussion, ably led by Mark Collins, Chair of the Swallowtail and Birdwing Butterfly Trust, a worrying overlay of Swallowtail breeding sites and the Norfolk coastline with a 50cm sea-level rise showed that practically all the current breeding sites would inevitably become saltmarsh in the passage of time. A key emerging point was that more research is needed into the requirements of Milk Parsley before translocation can be considered. Attempts at Wicken Fen failed because the plants were too small; the butterflies do best when Milk Parsley achieves its natural two-metre height. Most problems with butterflies at the edge of their range are related to microclimate. Living amongst reeds over water increases the temperature just enough, it seems. Dick Vane-Wright (Canterbury University) summed up. I had no idea that there were so many subspecies of P. machaon, at least 24 spread across Europe and North America, and Dick pointed out that with considerable hybridisation the species is hugely complex. He concluded by praising the Swallowtail and Birdwing Butterfly Trust for calling the meeting and advised that partnerships amongst the 25 or so organisations represented in the room will be needed to tackle the challenging task of conserving these magnificent butterflies. A quite superb, home-prepared lunch and a hugely enjoyable walk around the fen led by Will Fitch and Kevin Radley of the Ted Ellis Trust completed a memorable day. Lucky participants caught fleeting glimpses of adult Swallowtails, but all saw eggs and larvae.

Many thanks to the organiser and SBBT Chair Mark Collins and Royal Entomological Society Conservation Special Interest Group Convenor Alan Stewart, to the Ted Ellis Trust and to the Swallowtail and Birdwing Butterfly Trust.