You are here: Home / Kinabalu or Borneo Birdwing 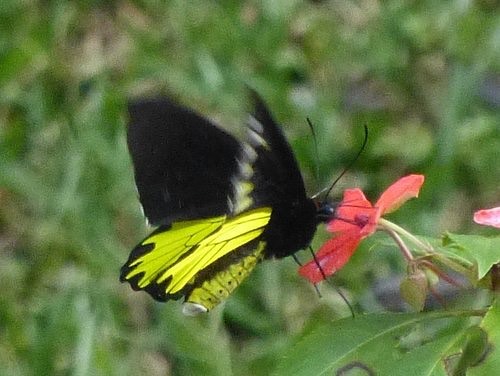 To go straight to an account of SBBT’s project on this species click here.  To learn more about the butterfly, read on.

The Kinabalu or Borneo Birdwing Troides andromache(Staudinger, 1892) is a superb species that is known from high elevations in a restricted part of Sabah and Sarawak in northern Borneo. Little is known of its ecology or precise range, but there is no doubt that threats to its habitat are multiplying. It occurs on Mt Kinabalu, an important national park for a variety of wildlife, but economic pressures are changing the park.  More information on T. andromache is required to assess its conservation status precisely, and land-use planning in the area needs to consider the butterfly’s restricted range.

To see a video click here.  This is a large butterfly with a forewing length of about 65 mm (male) or 85 mm (female). The male is black, yellow, and grey in colour, while the female has additional brown and white scaling on the forewing (2, 3, 8, 9). Although two geographically separated subspecies, the nominate and T. a. marapokensis Fruhstorfer, have been distinguished by some authors, the latter is now generally regarded as a female form of the former (6).

Male upper forewing entirely black with a violet sheen; lower forewing with a band of large greyish distal spots dusted with yellow. The hindwing is almost entirely yellow with black scaling narrowly over the veins, as a broad inner margin, and as large fringe spots producing an edentate submarginal band (2, 3, 8, 9).

Female forewing greyish-white lightly dusted with brown scales; brown apical area, outer margin and veins (2, 3). The hindwing differs from the male in the band of large, black discal/postdiscal spots. These join with the large fringe spots to leave very little of the yellow colour visible on the distal part of the hindwing (2, 3, 8, 9).

Troides andromache occurs in East Malaysia where it is known from Sabah and Sarawak in northern Borneo. The nominate subspecies is well known as occurring on Mt Kinabalu, particularly on the Pinosuk Plateau (1,5, 6), but it has also been recorded from neighbouring mountains in the Crocker range. It has been suggested that it may also occur further south in Kalimantan, the Indonesian sector of Borneo, where there is plenty of suitable habitat but where little collecting has been done. T. a. marapokensis occurs further south in the area of Mt Marapok in Sarawak, a different mountain from the Mt Marapok south of Mt Kinabalu in Sabah, where the subspecies has not been found, despite incorrect statements to the contrary (2, 3, 8).

Troides andromache occurs at high altitudes, from about 1000 to 2000 m above sea level. It has been described as an alpine butterfly (9) but this is misleading since the mountains are densely forested at such altitudes. It flies throughout the year, particularly in the morning and evening. Adults nectar on Mussaenda flowers and females fly lower than males (9). Virtually nothing is known about the ecology of the early stages. The foodplant is an unidentified species of Aristolochia vine, on which oviposition has been observed (9).

Destruction of the habitat of Troides andromache has occurred on a considerable scale (1, 4, 6). Parts of the Pinosuk Peninsula have been developed for tourism, with construction of access roads, a golf course and a visitor centre, and with other facilities planned. Other areas have become a tea estate and a cattle ranch or have been altered by timber processing and hydroelectric projects. A large area of eastern Kinabalu, designated as a national park, was leased (from 1973) for 30 years to a copper mining company. The Manu copper mine has changed the eastern face of Mt Kinabalu (4). For more details see the reviews of Graphium (Graphium) procles and Papilio (Princeps) acheron. Troides andromache is not a well-known species in trade and is only occasionally offered by dealers, usually as old rather than recently-collected specimens (2). The Indonesian province of East Kalimantan, where the species may possibly occur, has a low human population that is growing rapidly. Shifting agriculture and commercial logging are increasingly extensive in this region.

Little is known about the ecology of Troides andromache and research and surveys are needed as a basis for practical conservation measures. Although Mt Kinabalu was designated a national park in 1964 (7), economic developments in the short-term may reduce its value as an important wildlife area. Besides being the highest mountain in South East Asia, it has an exceptionally rich fauna and flora. T. andromache flies there with two other Rare swallowtails, Graphium procles and Papilio acheron (see separate reviews). The undoubted reductions in the habitat of T. andromache do not give cause for immediate alarm (1), but if economic and tourist pressure increase, the butterfly may become more seriously threatened. It is clear that effective and sensitive planning and practical conservation are required to ensure the adequate survival of the fauna of which T. andromache is a part.

Some mention may be made of conservation in East Kalimantan, even though there are as yet no records of T. andromache from this province. East Kalimantan is the least densely populated of the five Kalimantan provinces and is of especially high conservation importance because of its richness and diversity (10). The very large Kayan-Menterang reserve of 1.6 million ha, in particular, should be thoroughly surveyed for T. andromache.

The species should be retained, until its status can be reviewed, under Appendix II of the 1973 Convention on International Trade in Endangered Species of Wild Fauna and Flora (CITES). Appendix II listing implies that commercial trade is allowed providing a permit from the country of export is obtained, this can provide a method of monitoring trade levels.

This page has been transcribed and edited, with permission, from Threatened Swallowtail Butterflies of the World: the IUCN Red Data Book by N.M. Collins & M.G. Morris. Whilst providing a sound baseline of information, it is in need of updating. The full volume, with references, may be downloaded from the IUCN Library System.