You are here: Home / What Are Swallowtails & Birdwings? / Distribution & Classification 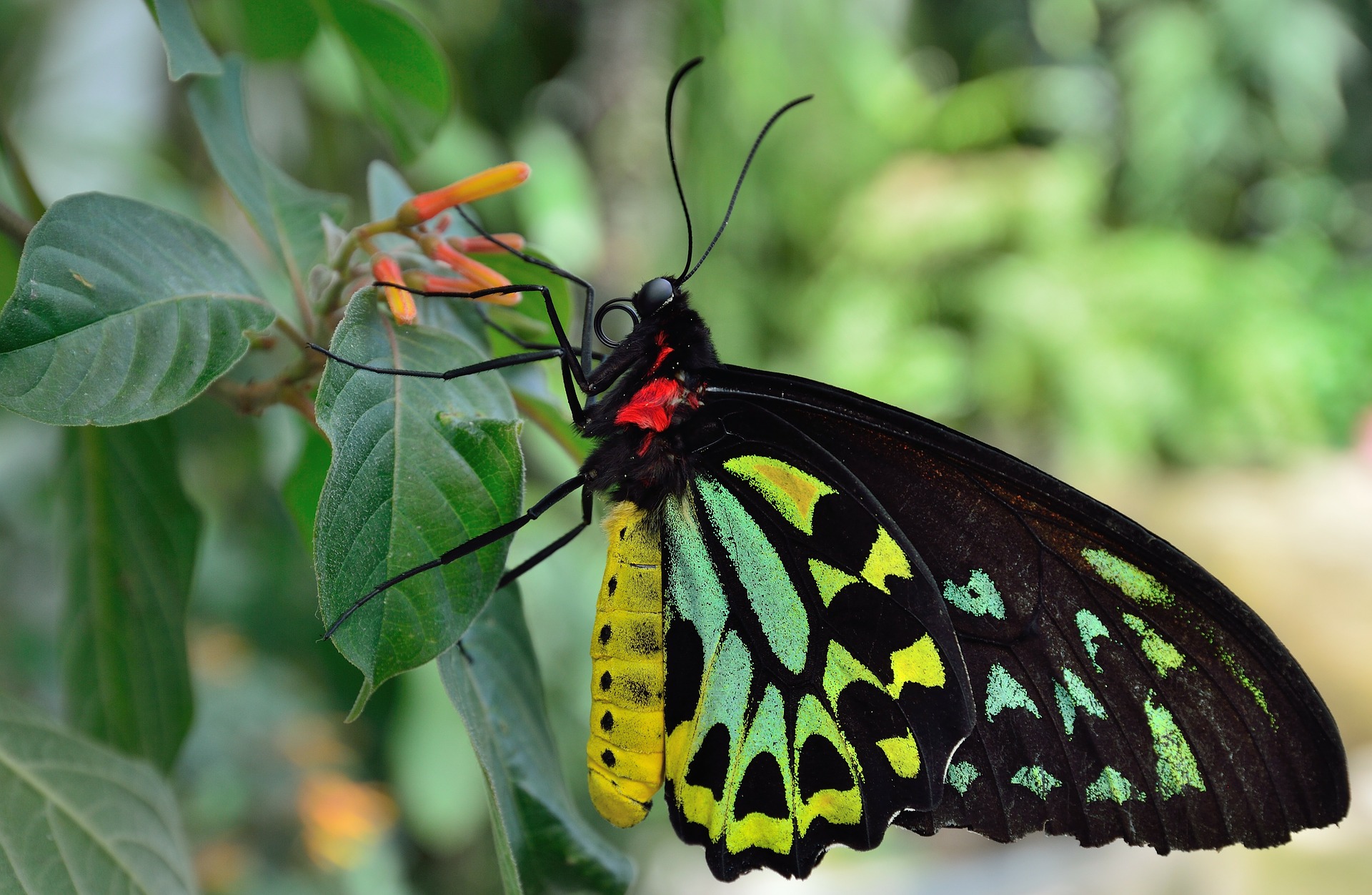 The Papilionidae is a pre-eminently tropical family (ca 20°N-20°S), although some species can reach latitudes 6O-70°N and 40-50°S. An analysis of the distribution of 538 species demonstrated the great increase in species richness at tropical latitudes. The richest areas are in the equatorial rainforest zones. South East Asia has the highest number of species but interestingly, species richness in the eastern Asian region between 20 and 40°N is also high, even exceeding the richness of the American and African tropics. The faunas of Indonesia, the Philippines and China include well over a third of the world’s swallowtails.

The classification of the Papilionidae has been a source of great difficulty to taxonomists. The main problem has been that the wide diversity of colouring, life cycle and habits is not reflected in clear morphological differences. This has been particularly problematical at the generic level where great variations in colour and pattern often overlie an essentially similar structural design. In the genus Papilio for example, experts could not find morphological differences useful in creating generic groupings with a smaller number of species. Fortunately, however, morphological, biological and chemical studies have met with success in developing our understanding of the taxonomy of the Papilonidae at the suprageneric level.

The living Papilionidae are divided into three subfamilies, the Baroniinae, Parnassiinae and Papilioninae. Each of these will be discussed only briefly here.

The Baroniinae includes a single species, Baronia brevicornis from Mexico, considered to be the most primitive living papilionid. Although the adults have the fore-tibial spur and osmeterium which are characteristic of the Papilionidae, the wing venation is very uncharacteristic in having both anal veins present on the hindwing, like Pieridae and Nymphalidae. Baronia is therefore believed to be a descendant of primitive papilionid ancestors close to the evolutionary stem shared by the Papilionidae and Pieridae . Baronia is also most unusual in feeding on Acacia (Leguminosae). The position of Praepapilio colorado, a fossil papilionid from the middle Eocene deposits of Colorado, U.S.A., is open to question. It shares some of the primitive features found in Baronia, but has been elevated to a monotypic subfamily of its own, the Praepapilioninae.

The subfamily Parnassiinae is divided into two tribes, Parnassiini and Zerynthiini. The former includes the monotypic genera Archon and Hypermnestra and the holarctic and species-rich genus Parnassius. Archon and Hypermnestra are confined to Asia Minor while Parnassius species are primarily butterflies of the montane areas of Europe, northern and central Asia and western North America. Primitively the larval foodplant is the lowland vine Aristolochia, as in Archon, but a switch within the Aristolochiaceae to the perennial herb Asarum by Luehdorfia, to the family Zygophyllaceae by Hypermnestra and to the families Saxifragaceae, Fumariaceae, Crassulaceae and Dipsaceae by Parnassius has permitted a great expansion in alpine regions. Tectonic upheavals in central and southern Asia have encouraged extensive speciation by Parnassius; many species in the Asian mountains and plateaux remain very poorly known. The Zerynthiini have remained more conservative and retained Aristolochiaceae as larval foodplants. The tribe includes the genera Sericinus, Allancastria, Zerynthia, Bhutanitis and Luehdorfia, also found predominantly outside the tropics in southern Europe and Asia. Bhutanitis species such as B. lidderdalei, the Bhutan Glory, are highly prized and spectacular insects with a wingspan of over 10 cm and three tails to the scarlet-spotted hindwing.

The third subfamily, Papilioninae, is by far the richest (90 per cent of all swallowtails) and is divided into three tribes, the Leptocircini, Troidini and Papilionini. The Leptocircini includes seven genera which fall into two groups, Iphiclides, Teinopalpus and Meandrusa (sometimes called the subtribe Teinopalpiti) and Eurytides, Protographium, Lamproptera and Graphium (sometimes called the Leptocirciti). The first group is primarily Palaearctic, although Meandrusa extends to Indonesia. The larval food plants of Iphiclides and Teinopalpus are Rosaceae and Thymeleaceae respectively, but the foodplants of Meandrusa are unknown . The second group has a very wide distribution , believed to be the result of a spread through Gondwanaland from a North American/Laurasian ancestor. Eurytides from the Americas is a large genus of over 50 species using Annonaceae, Lauraceae and other Magnoliales as larval foodplants. Subgenera Protesilaus and Eurytides are retained here but were raised to generic level by others. Protographium is a monotypic genus that feeds on Rauwenhoffta (Annonaceae) in Australia. The two species of Lamproptera fly in South East Asia and breed on Hernandiaceae and Combretaceae. Finally, the genus Graphium, with over 90 species, occurs in Africa, Asia and Australia. Larval foodplants are variable and include Lauraceae for Graphium (Pazala), Aquifoliaceae for Graphium (Pathysa), Annonaceae, Malpighiaceae, Apocyanaceae, Annonaceae and Anacardiaceae for Graphium (Arisbe), and Annonaceae, Apocyanaceae, Lauraceae, Magnoliaceae, Monimiaceae, Hernandiaceae and Piperaceae for Graphium (Graphium).

The second tribe in the Papilioninae, the Troidini, includes eight genera almost all 13 species of which feed on Aristolochiaceae. Battus is primitive and occurs in the Americas. In South America Euryades is a genus of temperate grasslands while Parides is found in tropical forests. Cressida is a monotypic genus from Australia, closely related to Euryades. Atrophaneura is mainly eastern Palaearctic and Indo-Australian, but with the extraordinary relict species Atrophaneura antenor in Madagascar. Finally, the three birdwing genera are Trogonoptera from the forests of Sundaland and Palawan, and Troides and Ornithoptera from Indo-Australia.

The third tribe, Papilionini, includes over 200 species in the single genus Papilio. The larval foodplants of Papilio are extremely variable. The American and Caribbean subgenus Papilio (Pterourus) feeds primitively on Rutaceae, but has spread to include at least 11 other plant families, notably the Lauraceae, Magnoliaceae and Piperaceae. Papilio (Heraclides), also from the Americas and Caribbean, uses mainly Rutaceae and Piperaceae. Papilio (Eleppone) is a monotypic subgenus from Australia that feeds on Rutaceae. Papilio (Chilasa) species often mimic distasteful milkweed butterflies (Danainae) and they are distributed in eastern and South East Asia, mainly on Lauraceae or Magnoliaceae. Papilio (Papilio) includes only the 14 species in the machaon group. Some of these butterflies are very familiar to entomologists in the northern hemisphere; machaon itself has a vast range stretching from Great Britain to Saudi Arabia, North America and Japan. The foodplants are Umbelliferae, Compositae or Rutaceae. The final subgenus, Papilio (Princeps), is a vast assemblage of over 130 species that feed almost entirely on Rutaceae and inhabit Africa, Europe, Asia and Australia. They have evolved a stunning variety of form and pattern, from the iridescent blue of Papilio zalmoxis and the giant wings of Papilio antimachus in Africa, to the delightful hues of the Gloss or Peacock Swallowtails (paris group) and the realistic mimics found in the memnon group of Asia.

We have adopted a conservative and utilitarian approach to nomenclature simply to serve the best interests of our readership. Our message is conservation rather than taxonomy and our aim is to help the many politicians, legislators, scientists, conservancies and individual campaigners whose task it is to protect and preserve wild fauna and flora. Those specialist entomologists who have a deeper understanding of the inter-relationships and evolution of the swallowtails will surely not be misled by such an approach. Readers interested in the arguments for and against the alteration of long-established systems of nomenclature and classification will not be disappointed by the literature, in which conflicting views are regularly aired.

The present patterns of diversity of the three Papilionidae subfamilies may not necessarily reflect their centres of origin. Although Shields and Dvorak proposed a Neotropical or Indo-Australian origin for butterflies (including the Papilionidae), Hancock has recently argued convincingly against this. He concludes that in the case of the Papilionidae it is inappropriate to use diversity as an indication of centre of origin. The South East Asian fauna contains elements derived from the Palaearctic, Australian, Oriental and Afrotropical regions. No doubt it owes its richness to speciation patterns on the continental shelves and island arcs that comprise the present geography of the area. Similarly, speciation in the neotropics, which also has a fairly rich fauna, reflects the great diversity of habitats and perhaps the influence of Pleistocene forest refugia. Hancock contends that the centre of origin of the Papilionidae was Laurasia, one of the two Tertiary super-continents. According to the hypothesis, during the Cretaceous period Laurasia divided into three sections, each with a subfamily of swallowtails: Baroniinae in the western North America block, Papilioninae in the eastern North America-Europe block and Parnassiinae in the Asian block. Dispersal to Gondwanaland (which gave rise to South America, Africa, Australia, Madagascar, India and Antarctica) was supposedly facilitated via an island arc between North and South America. The theory is supported by the present distribution of the primitive genera from the three subfamilies, Baronia (Baroniinae) in Mexico (with the closely related fossil Praepapilio in Colorado), Archon and Sericinus, Bhutanitis (Parnassiinae) in western and eastern Asia respectively, Eurytides (Protesilaus), Papilio (Pterourus) and Battus in the Americas, with the most primitive groups in North and Central America. With Baronia and Praepapilio in the western North America block, this may be the most likely area for the origin of the Papilionidae. It must be admitted, however, that these ideas are still contentious and there is a need for further research. The fossil record for papilionid butterflies is poor and a few new finds could greatly alter the present interpretation of patterns.

Transcribed, adapted and abbreviated, with permission, from Threatened Swallowtail Butterflies of the World: the IUCN Red Data Book by N.M. Collins & M.G. Morris. The full volume, with references, is available from the IUCN Library System.