You are here: Home / SBBT’s Further Studies on the Natewa Swallowtail 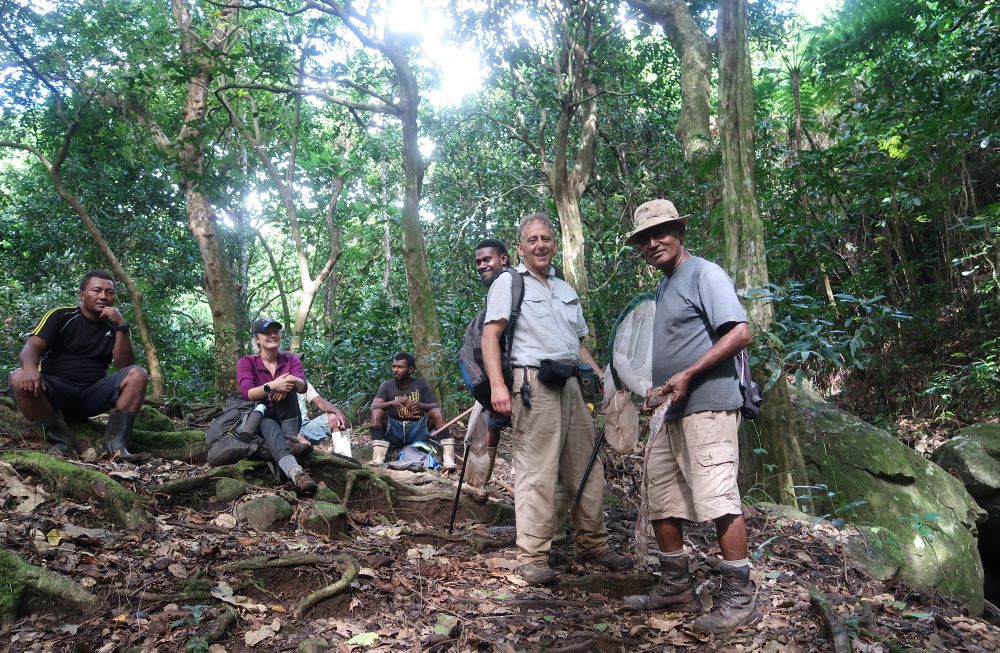 I joined the two month Operation Wallacea Fiji expedition for five weeks in a tented camp alongside an abandoned Forestry Cabin on the Natewa Peninsula, Vanua Levu island from 8th June until 14th July 2019. The purpose was to continue a survey of butterflies on the peninsula (commenced 2 years ago) with a view to proving the importance of the forests there for endemic invertebrate species. In combination with data on other animals and plants, there is growing evidence that the area is of sufficient and unique value for it to be protected as a National Park. At the same time, we were making a sample collection of butterflies and certain other insect orders for the Natural History Museum, London and Fiji’s University at Suva. A particular interest was to follow up on the discovery and publication last year of the new Natewa Swallowtail butterfly, Papilio natewa with more in depth research. It appears to be confined to a few kilometers radius of our Forest Camp in the centre of the peninsula therefore highly dependant on this forest being preserved. We obtained samples of the larval foodplant tree, which have been sent for identification for the first time. Local residents are keen to set up a breeding programme to supplement Papilio natewa’s population. I also recorded the other Fijian endemic Swallowtail Papilio schmeltzi occurring in the same area.

The Fijian biologist Visheshni Chandra, joined me during my last week at the forest site. An expert on Papilio schmeltzi, Visheshni is keen to carry out more studies on the ecology of Papilio natewa and promote protection of its habitat. I was also able to meet Richard Markham on several occasions. Though not part of the Operation Wallacea team this year, his local butterfly knowledge was most helpful. With land on the peninsula invariably owned and managed by local village communities (mataqali), much time was spent by Dave Byng the Operation Wallacea country manager, aided by Operation Wallacea founder Tim Coles, in meeting village Chiefs to obtain permission for us to work in their area and explain why they might allow their territory to become part of a National Park.

These meetings have helped to convince land owning communities across the peninisula that protection of the remaining forests is the way to achieve long-term, sustainable livelihoods. In particular, benefits would accrue from ecotourism. As a result of negotiations initiated by Tim Coles, one company in Nadi is already making arrangements for wildlife tours. Local guides trained by Operation Wallacea scientists will be used by these ecotourism businesses. There is also the potential to obtain support from the UN, REDD+ carbon fund for preserving standing forest timber.

The rainy season extended abnormally through June, including two days with extremely heavy rain being the worst storms experienced by Operation Wallacea over their three seasonal visits. Adding information on Papilio natewa’s low population numbers and behaviour, our local guide confirmed P. natewa had continuous generations year round. There were few sightings in June but by early July with more settled weather, they appeared on a regular basis and in my final week I could be sure of finding them every day. P. natewa keeps to a distinctly forest habitat, flying directly into or out of dense forest only in search of food or courtship opportunities. Adults were only seen feeding on nectar of the introduced flowering plant Stachytarpheta sp.

Radio communication between two teams was used to check on flight path of P. natewa combined with mark and release.

It was obvious by July that more of all butterfly species were then emerging, but butterfly sightings were usually scattered and never seen in profusion as might be expected in a tropical forest region.

Single sightings of the only other Fijian swallowtail, the endemic P. schmeltzi were regularly made at most locations around the forest edge, usually near a river.

Our trips out from camp entailed much scrambling around on steep muddy rainforest slopes behind our local guides cutting trails with machetes including reaching locations that no scientists had previously visited. With no mobile signal or internet we kept in contact carrying radios and testing new satellite Text Messengers, it was 1.5 hours drive on rough tracks to the nearest town and airfield at Savusavu.

We were fortunate to have an Arachnid specialist on the team and he confirmed that a Crab spider and Jumping spider that I collected were both new records for Fiji and possibly new species.