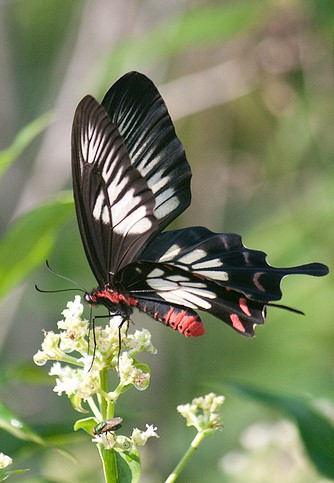 The Ceylon Rose, Atrophaneura jophon Gray, 1852, is a Critically Endangered species confined to the rain forests of south-western Sri Lanka. It is arguably the most seiously endangered swallowtail butterfly in the world and in need of urgent conservation measures. Over the past half a century the human population has more than doubled and these forests have been devastated by the combined impact of timber extraction and agriculture. The 11 000 ha Sinharaja Forest Reserve is probably one of the last strongholds of the butterfly, but selective logging and illicit encroachment have already reduced the virgin forest area to 5000 ha. Although the entire forest has now been declared a UNESCO Man and Biosphere Reserve, exploitation of forest products continues to threaten the butterfly’s habitat.

This is a large butterfly with a long tail to the hindwing, a forewing length of 60-64 mm, and similar sexes. The forewing is black with creamy-white markings in the discal and postdiscal regions, less well defined on the upper forewing which has heavier suffusion of black scales (2, 3, 10). The hindwing is deeply scalloped with a long spatulate tail. Black ground colour with creamy-white discal spots and pink submarginal spots, reduced to narrow lunules by heavy black suffusion on the upper hindwing (2, 4, 10).

Atrophaneura jophon is endemic to Sri Lanka. It was formerly considered to be conspecific with Atrophaneura pandiyana from southern India (10), but has been recognized by Munroe (8), and Hancock (6) as a quite separate species.

This butterfly flies at medium elevations (615-1230 m) in the wet, south-western zone of Sri Lanka (2, 10). Here the rainfall is over 2000 mm per year with no month completely dry and two main rainy seasons, from March to May and June to September (5). The natural vegetation is tropical evergreen rain forest, which is restricted to these south-western regions. The drier and more seasonal climate of the eastern and northern regions supports tropical savanna vegetation (5). Below 900 m the rain forest has a closed, dense canopy at 22-27 m with emergents to 45 m. Typical trees include species of the genera Dipterocarpus, Shorea, Mesua, Doona, Hopea, Palaquium, Pygeum and others (5). From 900 to 1500 m montane semi-evergreen forests grow to 18-24 m, with emergents to 30 m (5). The boundaries beween these two forests and the montane wet evergreen forests above 1500 m are indistinct.

The butterflies tend to fly low in the early morning and in the forest canopy later in the day (10). The eggs are yellow-brown, believed to be laid on the undersides of young leaves of Aristolochiaceae (10), as is the case in Atrophaneura pandiyana (2, 10). The caterpillars are purple-black with crimson tubercles and cream bands (10). Although usually rare and local, where it does occur it has been recorded as fairly numerous (10).

Since the last comprehensive inventory of Sri Lankan forest resources in 1959-60, widespread deforestation has occurred. Of 2.9 million ha of closed broadleaved forest in 1956, only about 1.6 million ha rmained in the 1980ss, excluding forest fallows (5). Of this total, only about 0.43 million ha is not exploited, over half of this for reasons of physical inaccessibility, the rest for legal reasons (5). Deforestation in the country as a whole constitutes a very serious problem. The main cause is the pressure for agricultural land and forest products caused by high population levels and population growth rates, factors unlikely to be alleviated in the near future. The human population has doubled since the 1950s and now stands at almost 15 million.

The main threat to this narrowly endemic and local butterfly is the destruction of its habitat. Members of the subgenus all fly in dense forests and there is no evidence to suggest that they can survive serious disturbance.

Numerous protected areas have been set aside in Sri Lanka and during the first half of this century the country boasted one of the best conservation programmes in Asia (7). However, the great majority of the reserves were in the dry northern and eastern regions (1), where this butterfly is not found. According to D’Abrera (2), the forests between Ratnapura and Deniyaya alluded to by Woodhouse and Henry (13 ) and Woodhouse (12) as the habitat of the butterfly, are now almost completely cleared for timber.

The last extensive area of primary lowland rain forest is the Sinharaja Forest Reserve, probably one of the last strongholds of Atrophaneura jophon . In the past, the butterfly is known to have been well established here, but there is now evidence that the constant human disruption of the reserve is causing depletion of the butterfly populations (2).

Although the Sinharaja forest is 11 000 ha in extent, only about 5000 ha remains undisturbed (as at 1985), the rest having been seriously disrupted by a selective logging operation in 1972-75, illicit agricultural encroachment in many places along the reserve boundaries, and constant pressure for minor forest products (3). In April 1978 about 1822 ha of forest was declared a UNESCO Man and Biosphere Reserve and the rest of the area has since been included under this designation (9). A number of scientific studies have been carried out there. The reserve is the responsibility of the Forest Department of Sri Lanka, which has taken steps to ensure its protection, but policing the area is a continuing problem.

A survey of the butterfly fauna, with emphasis on Atrophaneura jophon, would add to the already evident value of the reserve. Sri Lanka has 15 species of swallowtails including another endemic, Troides darsius, two other species of Atrophaneura, A. hector and A. aristolochiae and two Papilio species restricted to Sri Lanka and southern India, P. polymnestor and P. crino. For many of these species the Sinharaja Forest Reserve will become an increasingly important habitat resource.

Sri Lanka’s President appointed a task force to examine the status of the island’s natural resources in relation to their conservation and utilization for the future (11). Recommendations will be made for the development and implementation of a National Conservation Strategy (11). Unless the decline in Sri Lanka’s forests is arrested quickly, Atrophaneura jophon, already critically endangered, and many other species may become at risk of extinction.

This page has been transcribed and edited, with permission, from Threatened Swallowtail Butterflies of the World: the IUCN Red Data Book by N.M. Collins & M.G. Morris. Whilst providing a sound baseline of information, it is in need of updating. The full volume, with references, may be downloaded from the IUCN Library System.