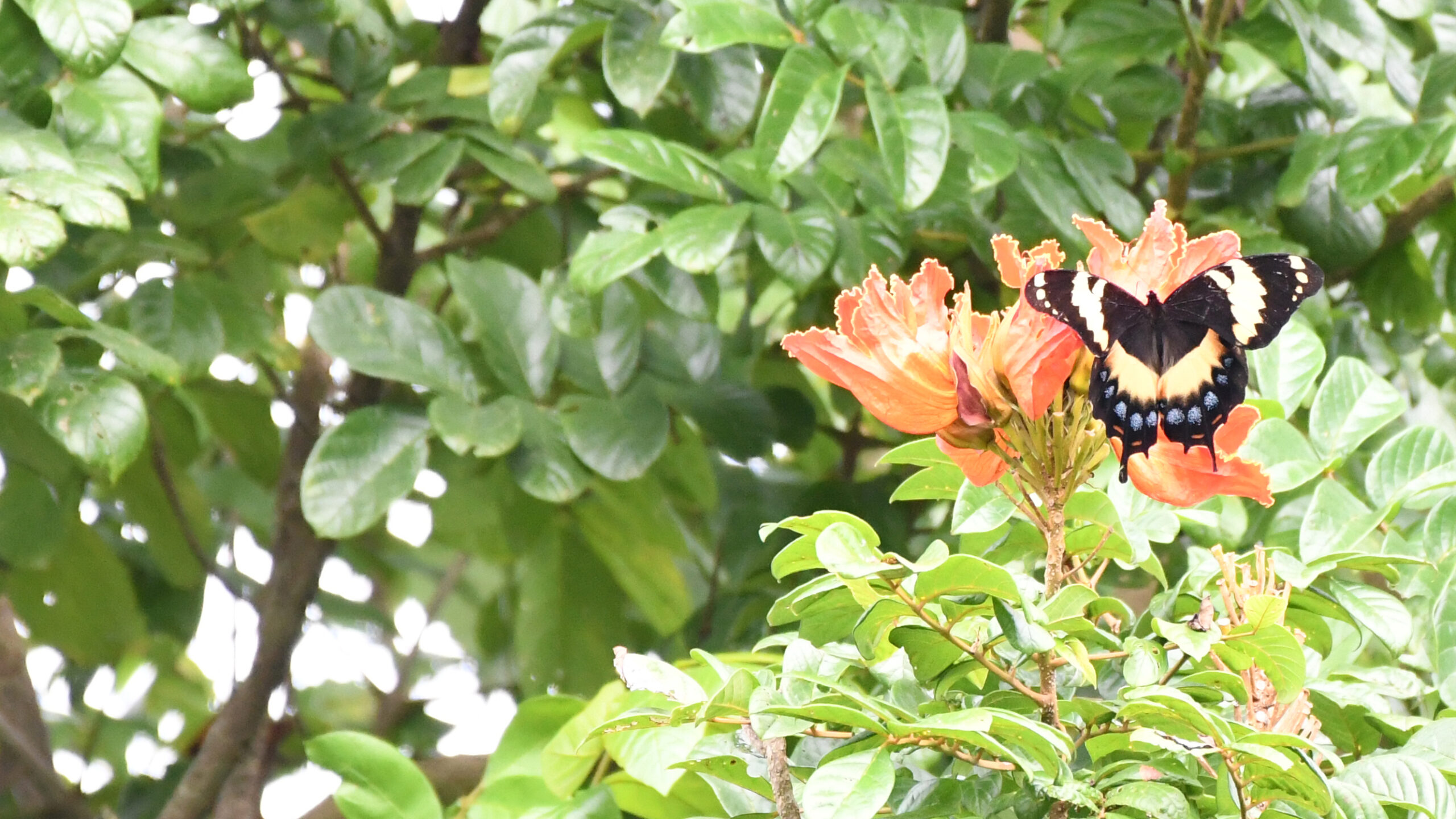 SBBT held the first “Saving Swallowtails” Conference on Saturday 12th June 2021. There were 150 registrants and all presentations were published on YouTube where views quickly exceeded 1000. With swallowtail conservation practitioners presenting from all around the world, we decided to hold two recorded conference sessions online, each with seven papers and a live discussion. One session began at 08:00 UTC for Europe and Africa across to Fiji, and the other at 17:00 UTC for the Caribbean and Americas.

The first two papers, by Matt Cecil of the Richmond Birdwing Conservation Network and Ian Gynther of the Dept of Environment and Science, Queensland Government, explained that habitat fragmentation in eastern Australia since the 1870s has severely impacted the Richmond Birdwing Ornithoptera richmondia. The species suffered “inbreeding depression” as a result and was further hampered by the female laying on invasive species of Aristolochia that poisoned emerging larvae. Habitat corridor development, coupled with enrichment using nursery-grown foodplants, removal of invasives and release of captive-bred stock has turned the situation around. The campaign inspired local communities to engage through education, fieldwork and financial support, resulting in major improvements to the butterfly’s viability.

Fabien Condamine, CNRS Institut des Sciences de l’Evolution, explained that Queen Alexandra’s Birdwing Ornithoptera alexandrae is confined to two separate populations in Papua New Guinea. A captive breeding programme is under development but the conservation strategy depends upon whether the populations are different taxa. Genetic analysis of two adults and two larvae sacrificed under licence from each site concluded that, despite a lack of geneflow between the populations, they are the same taxon and a regional strategy should therefore be pursued.

Sabah’s Stephen Sutton introduced the Borneo Birdwing Troides andromache, found only in cloud forest at 1500-2000m elevation on Mt Kinabalu. Lowland competitors prevent downward range expansion, while climate change is gradually shifting suitable montane zones to smaller areas. Through research, education and communication, the lifecycle and food plant have been discovered and local people are engaged in rearing and stewardship. The Borneo Birdwing is now an icon of the Mt Kinabalu World Heritage Site and its future is more assured.

SBBT’s Martin Partridge presented an assessment of the 36 species of birdwing found from India to the Solomon Islands. Twelve are threatened, one each from the Philippines, Malaysia, PNG and Australia and eight from Indonesia. With the exception of Rothschild’s Birdwing Ornithoptera rothschildii and the Borneo Birdwing, these are lowland species vulnerable to deforestation. Mapping demonstrated that current protection systems are inadequate. Research is needed on life histories and foodplants, and engagement with local landowners and communities is a necessary precursor to successful projects.

Richard Markham of KokoMana Pte Ltd, Nunia Thomas-Moko of NatureFiji-MareqetiViti and Clive Huggins, Associate of the Natural History Museum presented the Natewa Swallowtail Papilio natewa, discovered on Vanua Levu in 2017. The unusual ebony tree foodplant has now been found but not formally identified. Threats include illegal trade and land clearance for kava production, leading to erosion and land degradation. Captive breeding facilities have been built and agroforestry, ecotourism and carbon credits explored as alternatives for the local communities. Protected areas and control of trade are urgently required.

Anuj Jain of the Nature Society (Singapore) described how Singapore’s 478 recorded species of butterfly (30% of which are extirpated) lost 90% of their forest in the twentieth century but now have 40% secondary forest cover. Of the eighteen extant swallowtails, conservation effort is focused on the Common Rose Pachliopta aristolochiae recently adopted as Singapore’s national butterfly and the Common Birdwing Troides helena, both of which now depend on non-native foodplants. Community-based butterfly trails and other initiatives are raising awareness, setting the scene for a detailed conservation strategy.

Eric Garraway of the University of West Indies, supported by John Parnell, formerly of UWI, described the phenology and habits of the western hemisphere’s largest butterfly, the Homerus Swallowtail Papilio (Pterourus) homerus of Jamaica. The two populations of this rare butterfly are widely separated but attempts at genetic analysis for conservation planning have proved inconclusive. Early success in promoting the species as a national treasure, building community support and establishing a protected area have suffered setbacks in the face of a declining economy, rising unemployment and threats from bauxite mining.  Ecotourism has not been a success and ways to reward local community stewardship are needed.

Tom Turner of the McGuire Centre for Lepidoptera and Biodiversity, University of Florida and Vaughan Turland, Research Associate, Windsor Research Centre, Jamaica, explained the lifecycle of the Blue Swallowtail Protographium marcellinus, which is found in just four sites where its foodplant Black Lancewood Oxandra lanceolata grows in low rainfall limestone habitats. The tree is over-exploited for poles to support yam vines, and nurseries are needed. The butterfly should be classified as critically endangered and protected through engagement with landowners and training of wardens.

Jaret Daniels, also of the McGuire Centre, introduced the only butterfly federally listed as endangered in the USA, Schaus’ Swallowtail Papilio (Heraclides) aristodemus ponceanus. Populations fluctuate dangerously in Florida’s few remaining tropical hardwood hammocks where the rutaceous foodplants Torchwood Amyris emelifera and Wild Lime Zanthoxylum fagara are found. Captive breeding with hand-pairing has succeeded and with wild releases exceeding 1500 individuals since 2014 and additional support for habitat restoration, the future of the subspecies is brighter.

SBBT’s Mark Collins explained that the British Swallowtail Papilio machaon britannicus, confined to seventeen reedbed sites together with its Vulnerable foodplant Milk-parsley Thysselinum palustre, is threatened by sea-level rise and an invading subspecies. Sea-level rise would change large areas of reedbed to saltmarsh and the currently well-protected sites may not survive such inundation. Climate warming encourages European mainland P.m. gorganus to migrate to the UK, where it has been recorded on the south coast. A strong flier able to breed on many common species of Apiaceae, P.m. gorganus may eventually out-compete its reedbed cousin. Transfer of P.m. britannicus and its foodplant to newly restored wetlands further inland is a possibility.

Simona Bonelli, University of Turin, said that the Southern Swallowtail Papilio alexanor suffers from habitat loss and illegal collecting on calcareous slopes of Italy’s Maritime Alps. The larvae feed on Apiaceae and modelling has identified twelve areas suitable for population enhancement and habitat restoration, including in quarries. To be sustainable, such measures require greater awareness in local people, landowners and tourists, with butterfly trails and information panels made available.

Richard Bennett of Mida Butterfly Farm on Kenya’s coast described how 500 community butterfly farms in the region supply 100,000 captive-bred pupae per year to exhibits in the UK, USA and Europe. Several years’ research and training are needed to prepare for export. Fifty species are currently made available, including eight swallowtails. Breeding cages are designed to provide near-natural conditions. The Emperor Swallowtail Papilio ophidocephalus requires a 5m circular cage with carefully controlled shade, humidity, predation and parasitism. The industry helps community development and builds respect for the natural environment.

Andre Freitas and Augusto Rosa of the University of Campinas explained that Brazil’s Action Plan for Lepidoptera includes 71 elements, twelve of them for swallowtails. Of Brazil’s 67 swallowtails ten taxa in eight species are threatened. Two subspecies of Papilio (Heraclides) himeros have disappeared from haunts around Rio de Janeiro as has the highly endangered Parides ascanius and the Parides mimics Mimoides lysithous harrisianus and M.l. sebastianus. Parides klagesi is scarce in the Amazon basin; Parides tros danunciae is a rarity of the Atlantic forests; in riparian forests Parides panthonus castilhoi is local while CITES-listed Parides burchellanus is endangered and the poorly known Parides bunichus chamissonia has few remaining colonies. More information is needed on localities, populations, behaviour and foodplants of Brazil’s rich swallowtail fauna.

In the live discussions, a number of themes common to the swallowtail conservation effort arose.