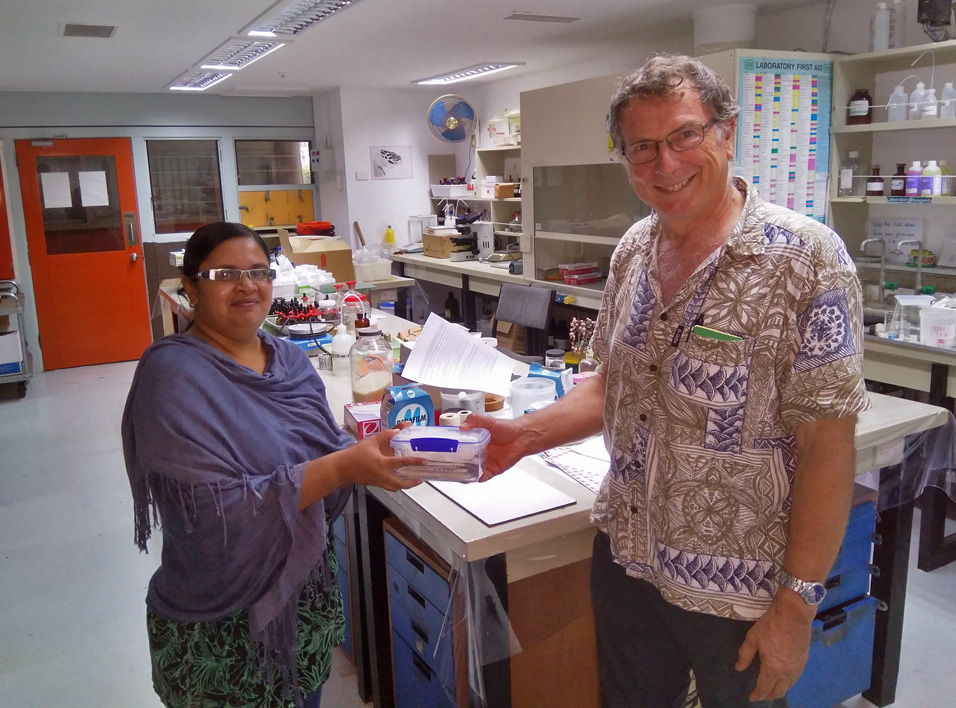 Fiji is a well-known group of islands but some areas have outstanding rainforests with hidden secrets. In July 2018, Fijian biologist, Visheshni Chandra, who lectures at the Fiji National University, captured a spectacular swallowtail butterfly that has turned out to be a species new to science.  It had been photographed alive in 2017 by a research team from Operation Wallacea, an organisation that helps students gain research experience in exotic places. They sent the pictures to the Swallowtail and Birdwing Butterfly Trust (SBBT), but no-one had seen it before.  Indeed, at first there were suspicions that the photo was a hoax!

Visheshni, who is an expert on Fiji’s butterflies, joined SBBT Associate Richard Markham  (shown above with Visheshni)and other specialists on Fiji’s Natewa Peninsula in June 2018, determined to catch one so that it could be properly studied.  After frustrating glimpses of it high in the forest canopy, she eventually managed to capture the first specimen, which has since been named the ‘Natewa Swallowtail’, the first for 50 years!  Who would expect such novelties from some of the best-studied islands in the world? The new swallowtail has such a small distribution that it is likely soon to be classified as Critically Endangered.

Gilbert Vakalalabure, head of Fiji’s Nambu Conservation Trust, aims to have the Natewa Peninsula declared as a National Park and was very excited about the find: ‘The discovery of this spectacular new butterfly will put us on the conservation map and help attract visitors, scientists and students. This will provide income to local communities, helping them to maintain the area for all to enjoy“ he said.

From SBBT’s perspective, it is amazing in such a well-studied island chain as Fiji, that research programmes like Operation Wallacea and determined researchers like Visheshni can still make new finds.  Now we can help ensure that its habitats are properly protected and that poaching doesn’t open up the area to unscrupulous collectors, who might be tempted to export specimens illegally. Rainforest on the Natewa Peninsula. Photo by Tim Coles

For this project the Swallowtail and Birdwing Butterfly Trust entered into an agreement with Operation Wallacea to conduct a survey of the butterfly fauna of the relatively isolated and poorly known Natewa Peninsula on Vanua Levu, Fiji Islands.

In 2017 Operation Wallace had undertaken a preliminary survey of the Natewa Peninsula and, amongst their many findings, photographed butterflies and submitted their pictures to the Trust for identification. At that time there was only one species of papilionid known from the Fiji Islands, Papilio schmeltzii, a relatively common species.

With the exciting prospect of completing a thorough survey in this remote region, the Trust brought together a two-man team of expert associates, John Tennent and Richard Markham, to take part in Operation Wallacea’s 2018 survey in July and August.  John and Richard were charged with carrying out a full butterfly survey of the peninsula, a task that had not previously been undertaken. They were supported by expert SBBT associates Adam Cotton in Thailand and Dick Vane-Wright in UK.

Most importantly, SBBT was also able to introduce Visheshni Chandra, a PhD student at the University of the South Pacific, Suva, to the project. Visheshni had already completed an MSc studying Papilio schmeltzii in the wild and proved to be an invaluable addition to the team. Operation Wallacea has activities in many other sites rich in birdwings, swallowtails and other butterflies, and the Trust looks forward to working alongside “OpWall” as it is often known, in our shared objectives of research and conservation.