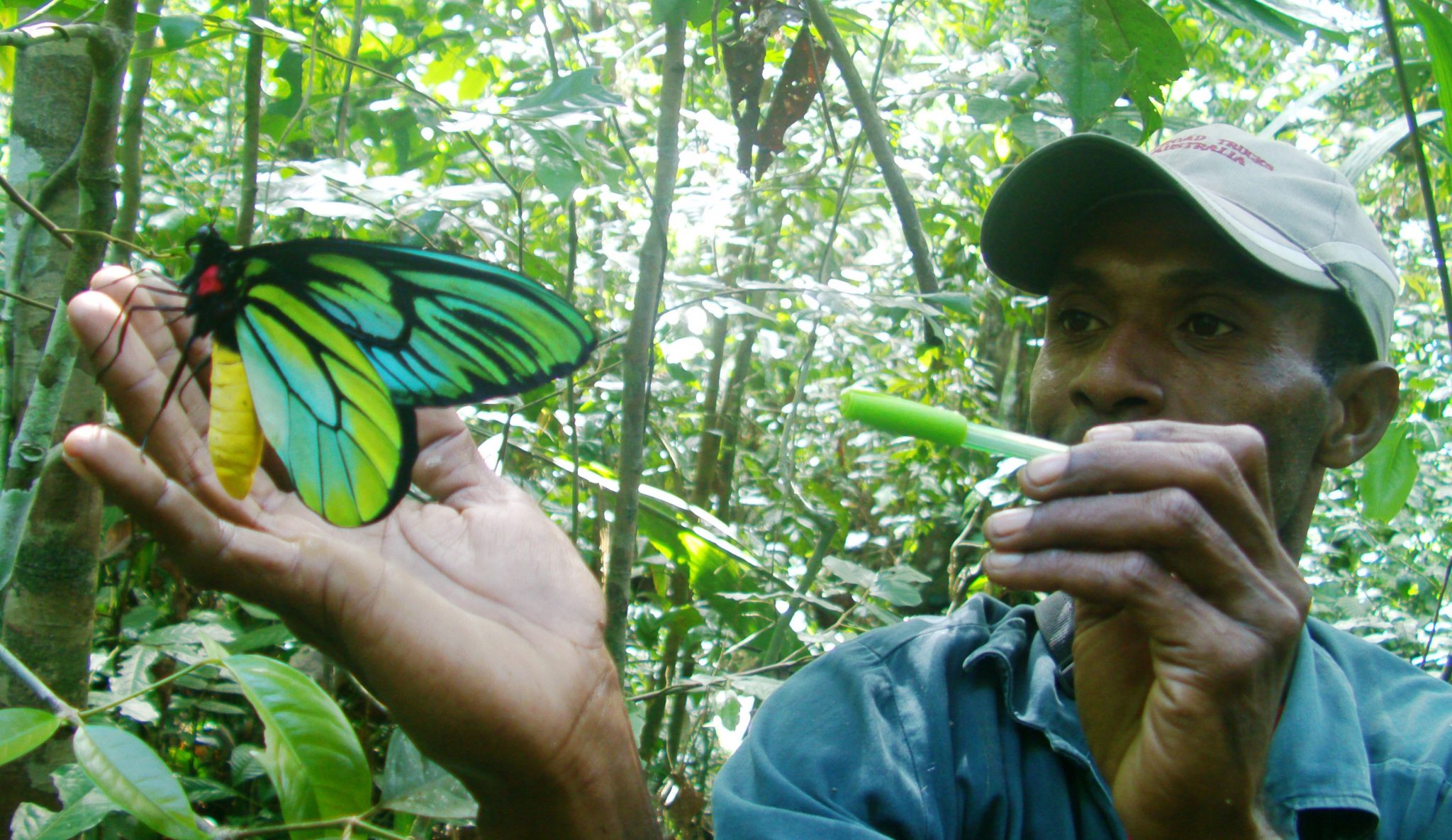 Queen Alexandra’s Birdwing (Ornithoptera alexandrae), is the largest and arguably the most beautiful butterfly in the world.  This magnificent species, in which the female may have a wingspan of up to 30cm, was discovered in Papua New Guinea by Albert S. Meek, naturalist to Walter Rothschild, in 1906, and named by Rothschild in 1907 after the wife of Edward VII and mother of George V, (5).  Protected by law in Papua New Guinea since 1966, and listed on CITES Appendix I in 1987, this species is severely restricted in its distribution as a result of habitat loss caused by large-scale logging, expanding smallholder agriculture, and oil palm planting.

Female: The females are predominantly dark brown with an average wingspan of 200mm (187-300), with the largest females coming from the remote Managalas Plateau.  The female is often confused with O. priamus (2, 4, 6, 8).

The forewing is dark brown with relatively small, light submarginal and discal spots becoming smaller towards the apex. The hindwing is elongated, with a band of seven pale grey, yellow-powdered, wedge-shaped pale patches separated by broad black bands over the veins.  All but the innermost cells contain brown discal spots, and all are more yellow on the upper hindwing.

At best, the distribution of alexandrae can only be described as fragmented (6).

The preferred habitat is open secondary forest either in or near the Popondetta Plain, or on the remote Managalas Plateau in the Northern Province of Papua New Guinea (PNG).  The first specimen, a small, atypical female, was collected in January 1906 from the type locality near Biagi at the headwaters of the Mambaré River (photo in 6), well outside its present range (3, 5, 6, 8).  This butterfly is known from only four sub-populations; all are on the northeast coastal region of PNG (6, pp. 34)).  It had been reported that the 1951 eruption of Mt Lamington destroyed 250sq. km of prime habitat, further fragmenting the already patchy distribution of alexandrae.

Ornithoptera alexandrae is closely associated with its larval food-plant, Aristolochia dielsiana (genus previously known as Pararistolochia), formerly known as Aristolochia schlechteri (8), in secondary and primary lowland rain forest up to 400 m altitude on the volcanic ash soils of the Popondetta Plain, and in secondary hill forest on clay soils from 550m – 800 altitude in its other locality (3, 6, 8).  O. alexandrae is not strictly monophagous, although this is due to the oviposition specificity of the female, as the larvae can mature equally well (and apparently better) on the softer-leaved Aristolochia tagala, a vine that is common and far more widespread throughout Papua New Guinea.  The more common Papua New Guinea Birdwing, Ornithoptera priamus, readily utilises the same foodplant as O. alexandrae.  It has been suggested that they will not co-exist, although both species in the larval stage have been found on the same vine (6).  Whether any competition occurs between the two species is uncertain.  The duration of the early stages (from egg to adult emergence) varies from 5 to 7 months (depending upon locality) while males may live up to a further three months in the wild, and females up to six months (6).  Adults are subject to little predation, although they are caught in the webs of the large orb-web spiders (Nephila spp.), and eaten by arboreal mammals and birds.  They are prone to fungal infection, and are caught by humans for financial gain.  Eggs are attacked by ants and Heteroptera (“true bugs”).  The larvae are preyed upon by toads, lizards and birds such as cuckoos, drongos and coucals.  Parasitism of larvae by unidentified tachinid flies, and pupae by parasitic wasps (Hymenoptera), has been reported (6).  Opinions vary as to whether parasitism occurs commonly or rarely.  It is believed that the aposematic (warning) coloration of the larvae and adults is an indication that they can probably store the toxins that their food plants are known to contain, using them for their own protection against more general predators (6, 7).  Adults are strong fliers but appear to remain in home ranges, ignoring other available habitat, although a female had been reported flying over open grassland (6).  It has been established recently that male butterflies often swarm around the forest tree, Intsia bijuga (Leguminosae, known locally as “Kwila”), when it is in flower.  Observations indicate that flying females will not accept males unless they have visited the flowers (6).  Experimental confirmation of this behaviour is needed, but the distribution of the tree may account for the absence of the butterfly from certain apparently suitable areas, although Intsia bijuga is a common and widely distributed species, it is subjected to much illegal logging.

The eggs of O. alexandrae are large (3.5 mm diameter), and it has been calculated that females, if their ovaries are continuously productive, have the potential to lay about 240 eggs during their lifetime.  They carry only 15-30 mature eggs at any one time (6).

Conventional mark-recapture methods cannot be used to estimate numbers of O. alexandrae as the species flies high in the canopy and is infrequently seen.  Larval counts are also low (only one or two may be located during a day’s survey) and the leaves of the foodplant vine are often 40m high in the upper canopy, effectively precluding observation of larvae that may be found there (6).

The greatest current danger is commercial logging, the expanding oil palm industry and smallholder development in the Popondetta region, although cocoa and rubber plantations still occur.  These activities have already claimed large tracts of forest known to have been habitat for Ornithoptera alexandrae (6, 8).  Exploitation of the reserves of wood in the Kumusi Timber Rights Purchase (TRP) continues to impact on O. alexandrae (6, pp. 37). O. alexandrae is greatly prized by collectors who pay high prices for adult specimens, and illegal trading undoubtedly takes place. Nevertheless, the illegal trade is not comparable with the loss of habitat as the main threat to the survival of O. alexandrae (6).

In 1966, the Fauna Protection Ordinance gave O. alexandrae and six other birdwings legal protection from collection. Ornithoptera alexandrae was originally included, together with all other birdwings, in Appendix II of the Convention on International Trade in Endangered Species (CITES), but was subsequently raised to Appendix 1 in 1987.

The law has been stringently enforced on several occasions, resulting in fines for nationals and fines and deportation of expatriates.  Surveys by the Division of Wildlife were undertaken to establish the presence or absence of O. alexandrae in some areas.  A large Wildlife Management Area (WMA), comprising approximately 11,000 ha of grassland and forest, was established north of Popondetta.  It is not clear how effective this WMA is in conserving wildlife in general, and O. alexandrae in particular.  Reports suggest that the WMA has agriculture activity within its boundaries.  Several thousand cuttings of A. dielsiana were prepared and an area of 4ha of government owned primary forest at the Lejo Agricultural Station was planted as a reserve and study area for O. alexandrae.  The Wildlife Division has applied for a total of about 40ha of government land to be rejected for use as oil palm plantations because of the deeply dissected topography.  The aim was to create reserves for O. alexandrae on government land, which can be protected by law in perpetuity.  A trial planting of A. dielsiana cuttings under tall, shady, mature (ca. 14 years old) oil palms was undertaken at the Popondetta Agricultural Training Institute to study the growth of the vines in this artificial habitat and to see whether O. alexandrae will eventually utilize them (6).  Provincial wildlife officers regularly hold educational meetings with people in the Northern Province, to explain why the butterfly needs to be conserved.

Negotiations to establish new WMAs have occurred between the Wildlife Division and interested landowners.  Proposals for three reserve areas within the Kumusi Timber Rights Purchase (TRP) area were supported by the landowners and the timber company involved (Fletcher Forests, New Zealand).  Implementation of the Conservation Areas Act (1978), which gives special protection to “sites and areas having particular biological, topographical, geographical, historic, scientific or social importance” is being considered for certain sites.  The Act also provides for the active management of such areas.  It is hoped that portions of prime Ornithoptera alexandrae habitat will be considered for inclusion under this Act (6).

Species such as O. alexandrae, which are not only impressive and very restricted in their range and hard to obtain, realise extremely high prices through illegal trade.  Within the Division of Wildlife in Papua New Guinea, there is a marketing agency, which supplies insect dealers with the unprotected insects of the country (IFTA).  With output from, and support for, the new rearing project in PNG (see below), the long-term future of O. alexandrae will, it is hoped, be safeguarded: it could provide an extremely valuable income to some of the people of Papua New Guinea.  Eventually assuming the project succeeds, the butterfly may become an added attraction to the growing tourist industry (6).

It is possible to breed O. alexandrae in captivity so its biology and the reasons for its monophagy can be more closely studied.  However, large flight cages are required if the species is to behave normally in captivity.  Experiments to breed selectively for a culture of O. alexandrae which oviposits on Aristolochia tagala may prove rewarding.  Despite its attractions, O. alexandrae is poorly known because it is so rare, and research on its life history, behaviour, natural enemies and population dynamics will now be undertaken at the same time that conservation measures are put into effect within the remit of the recently funded Yayasan Sime Darby Trust (YSD) / New Britain Palm Oil Ltd (NBPOL) project to which technical advice is also offered by the Swallowtail and Birdwing Butterfly Trust (www.sbbt.org.uk), and strong support provided by the PNG Government.

This web page has been updated, with permission, from Threatened Swallowtail Butterflies of the World: the IUCN Red Data Book by N.M. Collins & M.G. Morris (full volume, with references, downloadable from the IUCN Library System), principally utilising material from the more recently published book by Mitchell et al. (6), in which a very large number of published and unpublished scientific papers, reports and other documents may be found (available for purchase here).

SBBT is pleased to launch an online conference to celebrate World Swallowtail Day on Saturday 12th June 2021. This worldwide videoconference will be in two sessions, Eastern time-zone  08:00 – 11.00 UTC and Western time-zone 17:00 – 20.00 UTC. In all, 14 papers from top researchers will look at what is being done to protect threatened species. […]

This year’s UN World Wildlife Day theme is “Forests and Livelihoods: Sustaining People and Planet” – a subject very close to our heart in SBBT. Less than three years ago a new swallowtail Papilio natewa, was discovered on Vanua Levu, Fiji and, following a research programme, we are now sponsoring NatureFiji, the island’s main conservation […]

May 12th was National Limerick Day, celebrating Edward Lear’s wonderful invention of nonsense poetry. SBBT is inviting everyone to submit a limerick about swallowtails. Take a look at the details here. We will publish them on our website on World Swallowtail Day, 14th June. Why not have a go!?