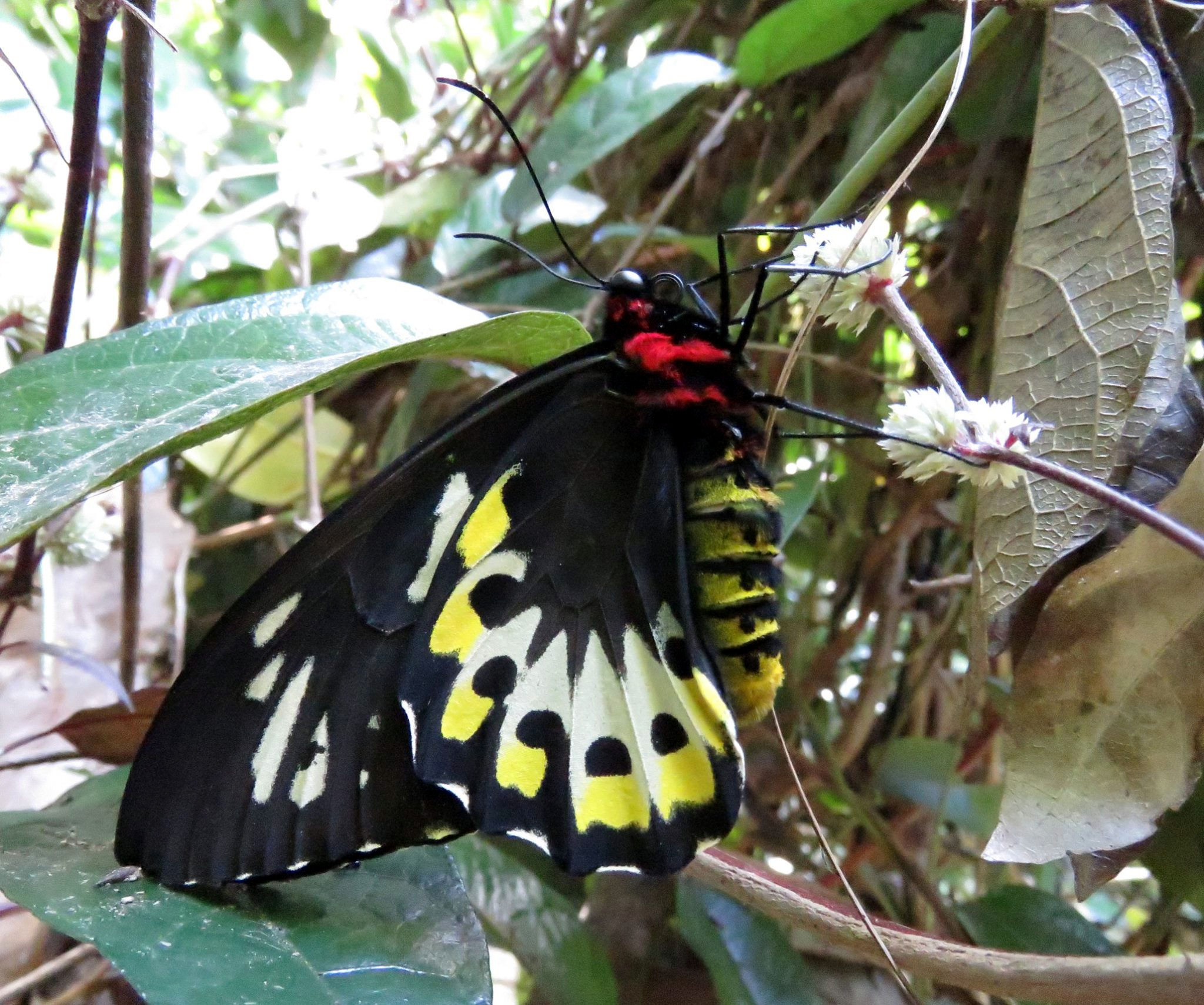 The vulnerable Richmond birdwing (Ornithoptera richmondia) is the largest and showiest subtropical butterfly in Australia.  Protected in Queensland, it is ranked as a critical priority for conservation action by the Department of Environment and Heritage Protection (DEHP), who are striving for its recovery in cooperation with the Wildlife Preservation Society. To go straight to information about SBBT’s grant to help captive breeding of the Richmond Birdwing click here.  To learn more about the butterfly and its problems, take a look at this excellent short film and then read on.

In the past, Richmond birdwings were relatively common in the region from Maryborough in south-east Queensland to Grafton and the Clarence River in the north-eastern corner of the adjoining state of New South Wales.  Early settlers even reported this species flying in the streets of Brisbane, Queensland’s capital.

Since then, Richmond birdwing populations have been severely affected by the loss and fragmentation of habitat, mainly rainforest, resulting in a significant overall contraction of the butterfly’s range.  The clearing and burning of understorey vegetation, invasion of riparian native vegetation by weeds and the mining of rainforest valleys for volcanic rocks are ongoing threats.  The poisonous South American Dutchman’s pipe vine (Aristolochia elegans) has become a serious invasive weed since its introduction as a decorative garden plant.  As the vine engulfs trees and other vines, chemicals in its leaves attract the Richmond birdwing to lay eggs, but the caterpillars are poisoned when they feed on the leaves.  Dutchman’s pipe is now classified as a restricted invasive plant and must not be given away, sold or released into the environment.

Currently, fragmented populations of the Richmond birdwing can only survive where host plants for the larvae grow.  Sadly, despite the presence of food resources, some populations of birdwings have disappeared over recent decades as a result of inbreeding, and the remaining isolated breeding colonies are at risk of local extinction due to a continuing decline in genetic diversity. In the subtropical lowlands of south-east Queensland, the Richmond birdwing is solely dependent on one plant – a native species called birdwing butterfly vine (Pararistolochia praevenosa). Without it, the butterfly can’t breed.  Adult females locate this host plant using their olfactory senses. They lay their eggs on the underside of the vine’s leaves and, upon hatching, the larvae start eating.

In 2014, Wildlife Queensland raised funds for, and organised the planting of, 1000 host vines for the Richmond birdwing across carefully selected sites in Queensland’s south-east.  These first 1000 vines are well on their way to establishing desperately needed corridors between existing Richmond birdwing populations.

In addition, DEHP and the Department of National Parks Sport and Racing have jointly conducted a captive-breeding and release program.  This project involves selectively mating butterflies sourced from isolated populations to produce offspring with improved genetic diversity for release to the wild.  This work was initiated as an emergency conservation measure until the separate populations of Richmond birdwings are linked by restored corridors or stepping stones of suitable habitat. By examining data collected by the active conservation group, the Richmond Birdwing Conservation Network (RBCN[1]), concerning the locations of birdwing sightings and both wild and planted birdwing butterfly vines, Wildlife Queensland has identified that the northern and southern populations of the butterfly are still separated by gaps in habitat and available food resources.

“It is critical that we connect these populations by creating stepping-stone populations of the vine to ‘join the dots’.  Without this, gene flow cannot occur, and the species simply will not persist in a healthy way,” said Matt Cecil, Projects Manager Wildlife Queensland.

Wildlife Queensland has therefore launched the “500 Vines Project”.  This will build on the success of 17 years of activity to stabilise Richmond birdwing populations in the region.  It will involve propagating and growing the vines in selected nurseries, planting them in strategically chosen locations and then maintaining them to ensure they have the best opportunity to survive.  Precise planting sites are selected based on suitability of habitat type, accessibility for planting and maintenance, and their proximity to one another (close enough for natural dispersal and colonisation to occur). Along with the efforts of the RBCN, the involvement of state government authorities, local governments, conservation organisations and catchment management groups have been critical to the success of Richmond birdwing projects undertaken to date, including in eradicating Dutchman’s pipe infestations and planting birdwing butterfly vines.  This support will continue in the new “500 Vines Project”, which aims to strengthen the link between the two core populations of the Richmond birdwing in 2018.